Bossam
Wrap some pork in Kimchi

Bossam which is often split out to Bo Ssam as it is a Korean wrapping food, hence the reference to Ssam which literally means wrapping. The idea being that the pork belly is cooked and sliced, then wrapped in either lettuce or Kimchi.

If you eat this in a restaurant you will find that it will probably be cooked in medicinal herbs, this is designed to add to the nutritional value of the dish and help with some common ailments.

Bossam originates from the Jolla-Do area of Korea and has origins in more noble classes of Korean history and is one a few dishes that's culinary origins are believed to stretch back to the Joseon era.

I have used the following Ingredients 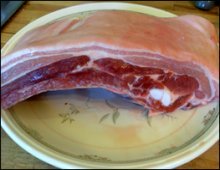 
This dish does take a few hours to prepare, however it is certainly worth it and great when you want to impress. Start by putting the pork in some cold water in a bowl and leave for about an hour to clean the meat, if the water is quite dirty drain and leave for a bit longer. 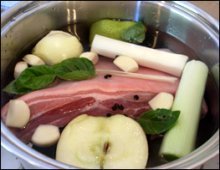 After the meat is clean, it's time to make the stock. Put about 2 litres of water in a saucepan, cut the leak in half and put this in the water with the pork, onion, pear and apple. Add to this 5 basil leafs, 10 black peppercorns and 7 whole cloves of garlic, bring this to boil using a high heat. 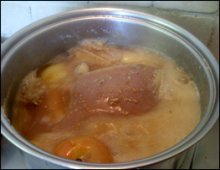 Check the meat is cooked and if not cook for a bit longer checking every 10 minutes until done. Once cooked Remove the pork and slice it (similar to my pictures below), the remaining stock can be saved or frozen, It makes a great gamjatang! 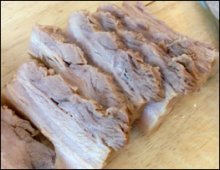 Serve alongside some Chinese (napa) Cabbage leaves and kimchi (You can use standard Kimchi like Beachu or pogi to wrap, you can also buy a bossam kimchi made for wrapping, it is an older kimchi which has a more sour flavour.) 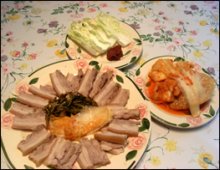 To eat take a piece of pork and wrap it in a leaf, if you have cabbage leaves add some Ssamjag sauce to flavour the wrap. Eat alongside some side dishes and rice for a complete meal.