Following the Korean war, American army bases became a permanent fixture in South Korea, to assist the South against any possible skirmishes with the North.

The Americans brought a number of foods that had never been seen in Korea such as Spam, frankfurter sausages and baked beans to name a few. In true Korean Fashion we took these ingredients and mixed with our own to make a spicy stew named Budae Jjigae which literally translates as the 'army stew'

Its a spicy dish, normally cooked in a big pan and served from the middle of the table, containing noodles, western ingredients and plenty of vegetables Budae Jjigae is a great example of Koreans putting there own mark on foods. My mother who lives in Uijeongbu where there are a couple of army bases is able to get this army stew at most restaurants as its very popular.

In addition to the ingredients I have used this stew is often made with Baked beans and sliced cheese which you can add if you wish.

I have used the following ingredients: 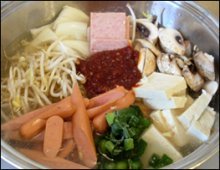 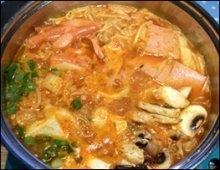 Start by putting about 800ml of water in a pan, add to this about 4 cubes or 2 tablespoons of chicken stock and mix well. Cut the Spam, sausages and tofu in to slices and cut all the vegetables. In a bowl add all the ingredients for the sauce and mix well, Place the sauce in to the pan and add the other ingredients around it, keep the noodles to on side for now. 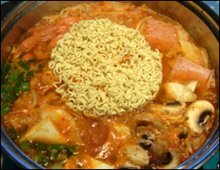 Bring the entire mix to boil and cook well, this should take about 15 minutes, the easiest way to check is to see if the onion is soft. At this point add some noodles it is common to use some instant noodles like shin Ramyun, you could though use any supermarket noodle. This will take a further 3-5 minutes to cook. 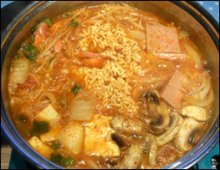 Serve in a bowl and enjoy, there should be plenty for up to 5 people and you could serve with rice and some side dishes if you like, however with the noodles there is enough to fill you up. 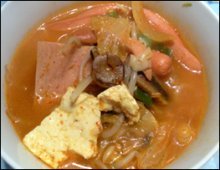 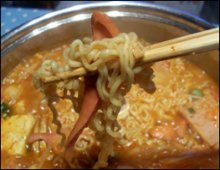