How to make Korean Dumplings
My Mandoo recipe

Korean Dumplings known as Mandoo are very tasty, enjoyed throughout the year but mainly at special occasions such as the Chinese new year and thanksgiving for example. Generally made from meat and kimchi wrapped in dumpling paper and either steamed, fried or boiled, making these from scratch is one of the more difficult recipes on my site but certainly worth the effort alternatively you could purchase these frozen from most Asian supermarkets.

Making mandoo does take some time and preparation, I have though tried to make this as easy as possible and included a number of pictures to illustrate.

I have used the following Ingredients: 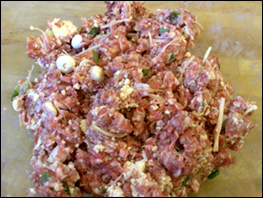 Start this dish by slicing the spring onion and crushing a clove of garlic and put them in a large bowl and add to this the minced beef and tofu. Mix this together well with your hands and add some salt, pepper and soy sauce (frozen dumplings tend to be quite peppery, I tend to only use a small amount) 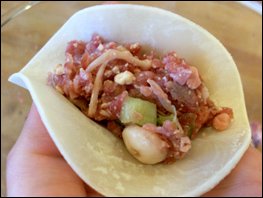 Put about a teaspoonful of this mixture in to each Korean dumpling paper, and dab water around the edge of the paper, this makes it sticky and will help to seal it, once sealed pinch the edge to create some folds. 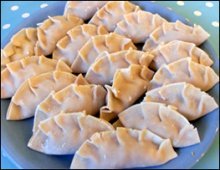 Do this until you have filled all the dumpling papers. You can cook these in a number of different ways:

Frying - These can be fried in a pan for about 5 minutes
Boiled - You can boil dumplings in boiling water for about 5-10 minutes
Steamed - Korean dumplings can also be steamed and this takes about 10 minutes.


Once finished serve on a plate with some soy sauce for dipping, and enjoy. The dumplings in the picture have been fried in a frying pan. 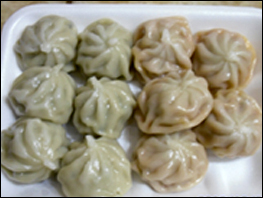 On the left are some steamed Korean Dumplings purchased from a street stall in South Korea. Here are 2 flavours one being the traditional beef mince and the ones on the right which are slightly red are filled with Kimchi, you can do this by squeezing the water out of kimchi, cutting it and placing in Dumpling paper.

Korean Dumplings are often added to soups, I have made a simple Korean Miso soup here and added some dumplings that have been boiled and cooked in the soup.